From the Beginning to the End 1918 – 1991. Exhibition in the Museum of Yugoslav History

Ivana Dobrivojević (1975) works as the research fellow at the Institute of Contemporary History, Belgrade, Serbia. She is the author of the books State Repression during the Dictatorship of King Alexandar 1929 – 1935 (2006) and Village and City. The Transformation of Serbian Agrarian Society 1945 – 1955  (2013). Her fields of interest include political and social history of interwar Yugoslavia, urbanization and modernization processes in socialist Yugoslavia and the life of ordinary people under communism. 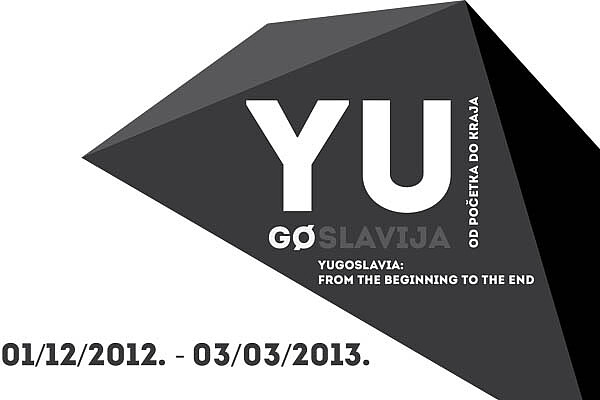 The Exhibition Yugoslavia: From the Beginning to the End 1918-1991 was opened in the Museum of Yugoslav History on 1 December 2012. The ninety-fifth anniversary of the unification of South Slavs into one state, The Kingdom of Serbs, Croats and Slovenes, was chosen as a symbolic opening day. Journalists from all over the region flocked to the Museum in order to fully cover the event. The publicity given to the exhibition was enormous - numerous articles and interviews with curators and authors were published. Most of the published articles were informative; journalists wanted to know more about the concept behind the exhibition and the most interesting objects presented there.[1] Curiously enough, in the politically divided societies of ex-Yugoslavia, it seemed that everyone could agree upon one thing: an exhibition about Yugoslav history and the very existence of the country was not only desirable, but also necessary.

Although the idea of such an exhibition was very well received in both expert and academic circles, and among the general public, the process of fleshing out that idea was long and difficult. The Museum of Yugoslav History was founded in 1996 as a successor to the Josip Broz Tito Memorial Centre and Museum of the Revolution. Most of the new museum's vast collections (more than 200 000 items) were more or less focussed on the life and work of Josip Broz Tito and the permanent exhibition in the Old Museum (one of the buildings in the Museum complex) dedicated to Tito did not fully correspond to the new name and the new focus of the museum. Thus, in 2009 the museum staff set about preparing a new permanent exhibition dedicated to Yugoslav history. From 10-12 December 2009 a conference, a public panel discussion and a workshop were organized at the Museum of Yugoslav History as part of the "New old museum" project. The participants were experts and young professionals from the region. After fruitful discussions, a smaller international team of experts continued to work on the exhibition concept. That team comprised the following people: Hrvoje Klasić, professor at the Department of History at the University of Zagreb; Saša Madacki, director of the Human Rights Centre at the University of Sarajevo; Dr Predrag J. Marković, research advisor at the Institute of Contemporary History in Belgrade; Marko Popović, director and co-founder of the Centre for Visual History at the Faculty of Media and Communications in Belgrade; Robert Rückel, director and founder of the GDR Museum in Berlin; and Katarina Živanović, the director of the Museum of Yugoslav History in Belgrade. This group of experts developed the concept of the future permanent exhibition at the Old Museum.

Bearing in mind that it would be difficult, if not impossible and futile to exhibit Yugoslav history as a whole in chronological order, the creators of the exhibition decided not to offer encyclopaedic data to visitors. Instead of presenting the milestones in the country's seventy-year history, the team opted for a thematic approach in order to examine the most important processes and phenomena that shaped and changed Yugoslav society. The main aim was to "introduce visitors to one of the most interesting and most controversial state-building experiments in the 20th century, in a modern, attractive and objective way". Conceptually speaking, the exhibition is divided into six larger entities: Yugoslavia - ID (which deals with the idea of Yugoslavism, Yugoslav unification, administrative divisions, legal acts that shaped the administrative and political framework); The Peoples of Yugoslavia (which deals with cultural, economic and religious differences between the Yugoslav peoples and the ideologies, actions and events that bonded/were supposed to bond them); The Seamy Side of the Regime (which deals with state repression in monarchist and socialist Yugoslavia); Yugoslavia in the World - the World in Yugoslavia (which examines all forms of interconnections between Yugoslavia and rest of the world in foreign policy, sport, tourism, movies etc.); Economy and Society (the largest section, which examines processes of industrialization, urbanization and modernization, changes in economic policy and gradual improvements in the standard of living); The End of Yugoslavia (which is dedicated to the dissolution of Yugoslavia); and four smaller sections beyond the main narrative of the exhibition: Assassinations, the Croatian Spring and Serbian Liberals, Bad Debt - The Agrokomerc Affair and Neue Slowenische Kunst (New Slovenian Art). Although it was widely assumed that the dissolution of Yugoslavia would present an almost insurmountable challenge for the authors and curators, this aspect of Yugoslav history was presented in an informative and "artistic" manner. A factual introductory text introduced the theme, while a lot of TV footage was used to depict the atmosphere on the eve of the war.

However, it soon became clear that staging such an exhibition represented a major challenge. Thus, the exhibition creators decided that it would be more prudent to make a cut-off point and stage an exhibition that would show the work in progress. The team of authors and curators did their best to write appropriate texts and find the most representative objects, but this preliminary exhibition was actually seen as a preparation for the (future) permanent exhibition. Museum experts, academics and other visitors were invited to make suggestions and give their opinion on the exhibition. However, the design of the exhibition was adjusted to fit the "work in progress" concept. It will be changed for the planned permanent exhibition.

This is the first time that the heritage kept in the cultural institutions of the former Yugoslavia has been gathered in one place, in the context of the Yugoslav legacy. On this occasion, certain material (TV footage and objects given to Tito, I.D.) has been museologically contextualized for the first time, while on the other hand, exhibition-related research has led to an expansion of our knowledge about some of the exhibited material. In keeping with the contemporary definition of heritage, which does not necessarily have to be institutionalized in order to be perceived as valuable, exhibits were also borrowed from individuals.

Although the creators of the exhibition were divided on certain "sensitive" and "controversial" topics, their discussions were productive and ultimately contributed to the quality of the exhibition. The Second World War (which was also a civil war on the territory of Yugoslavia) was the source of the main disputes and discussions. It was particularly difficult to reach a compromise on the interpretation of the role of the Chetnik Movement, which started out as anti-fascist but later became involved in collaboration.

Paradoxically, the greatest challenge was not posed by the experts' different perspectives on certain topics or different fields of expertise. The most demanding task was that of creating an objective and balanced exhibition, which would undermine stereotypical images of Yugoslavia in the media that purport to represent the only "knowledge" and the only "memory" of the vast majority of the population in Serbia and other successor states. These images often paint a romantic and nostalgic picture of life in socialist Yugoslavia. They exaggerate the country's international influence and significance, neglect the Cold War context, and idealize aspects of the Yugoslav past such as the social security system and non-existent unemployment. Yet sometimes, the history of socialist Yugoslavia is often reduced to the period of poverty, terror and violent state repression. In order to question these stereotypical images, which are often accepted at face value by the general public, the museum's curators tried to contextualize all aspects of Yugoslav history. For example, improvements in standards of living are analysed from a wider economic perspective in order to show how welfare in the 1960s and 1970s was mainly based on loans rather than on rising industrial output. While contextualization might seem to be a given in any exhibition or text on historical topics, in many cases historians are not consulted. The prime example of superficiality in the popular interpretation of Yugoslav history is the commercial exhibition that opened this June in a former department store in central Belgrade. The creators of the exhibition "Long live the Life" tried to reconstruct the lives of ordinary Yugoslavs under socialism. Instead of a balanced exhibition, a kind of Disneyland was created by using objects, scents and colours to provoke nostalgia with no attempt to explain the wider historical context.

Another major challenge was the lack of financial resources (the exhibition was financed by the Serbian Ministry of Culture and the Balkan Trust for Democracy), which made it difficult to realize all the ideas of the designers (Marko Dimitrijević and Ivan Benussi) and the authors (Bakić, Cvetković, Dobrivojević, Klasić, Petrović and Panić). As a result, the exhibition is a less interactive experience for visitors, but (we hope) still very informative and enjoyable.

In the first three months, 12 500 visitors visited the exhibition. Many of them made comments and suggestions, which were carefully evaluated by the authors, curators and museum staff. The most valuable suggestions will be taken on board in preparations for the permanent exhibition.

In May 2013, "Yugoslavia - from the beginning to the end" was voted best exhibition in 2012 by the Serbian Museum Association.

Copyright (c) 2013 by Imre Kertész Kolleg, all rights reserved. This work may be copied and redistributed for non-commercial, educational purposes, if permission is granted by the copyright holders. For permission please contact the editors.

Official webpage of the Museum of Yugoslav History

Links to articles in Serbian newspapers

More articles about the exhibition can be found here

Nevena Daković · 21.04.2022
Representing Trauma - Writing the Past Into the Present Through Films
Read more

Rena Jeremić Rädle · 25.10.2015
Remembrance in Transition: The Sajmište Concentration Camp in the Official Politics of Memory of Yug...
Read more