Eva-Clarita Pettai is research associate at the Imre Kertész Kolleg and co-editor of the Cultures of History Forum. Until 2017 she was senior rersearcher at the University of Tartu, Estonia. Her research focuses on the politics of history and transitional justice in post-communism, in particular in the Baltic states.
Michal Kopeček is co-director of the Imre Kertész Kolleg and head of the Department of Late- and Post-Socialism at the Institute of Contemporary History in Prague. His research focuses mainly on comparative modern intellectual history in East Central Europe as well as on postsocialist democratization. 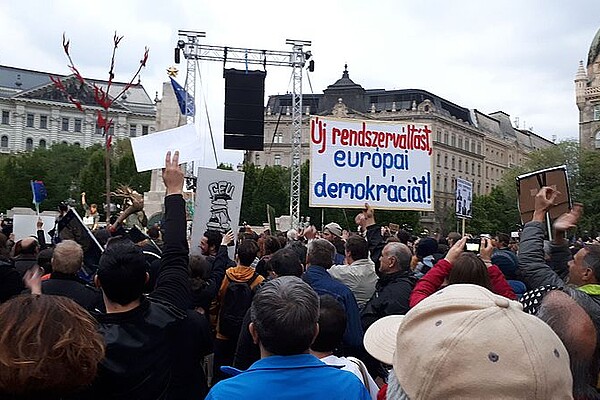 The 'Lex CEU' and the heavy anti-EU and anti-Soros campaigns that accompanied this legislative move against the Central European University (CEU) in Budapest in the spring of 2017 caused a major stir not just among academics worldwide, but among European politicians too. It was widely perceived as yet another move by the government of Viktor Orbán to retreat from basic principles of liberal democracy and the rule of law. Events in Poland over the summer, especially the recent attempts to eviscerate judicial independence in this other European Union member state, have further increased the impression that we are witnessing a new phase in a process that is marked by a significant shift away from the political ideas and value system that was established after the fall of communist rule in East Central Europe (ECE).

Yet, hindsight has led some observers of the region to question whether there ever really has been a kind of post-communist 'liberal consensus'. Do we need to reconsider the historical narratives of Central Europe’s successful path to longstanding democratic and rule of law-based governance? Ten years ago Ivan Krastev predicted a "slow death of the liberal consensus"[1] and indeed, liberal values of tolerance, equal rights and open society have been under attack already for quite a while, from both the Left and the Right. What is new today, perhaps, is the level of resentment against 'cosmopolitanism' and liberal thinking, joined with nationalist populism, which received a powerful boost during the migration crises in the last two and half years.[2] Sadly, the idea of re-building national identity on the basis of anti-Brussels sentiments has gained momentum, and so have the old/new illiberal and anti-modernist narratives that question most of the core elements on which the liberal transformation out of state socialism was built on.

Hence our aim with this special focus of the Cultures of History Forum is to place the ‘Lex CEU’ in a broader context, both regionally and conceptually, and to ask what is the actual state of academic freedom, civil society and liberal values in the countries that came out of communist dictatorships more than 25 years ago? At the same time, we have asked our authors to place this into the historical context; to reflect on continuities and change in political values and public attitudes since the late communist and early transition periods, in order to better understand the present-day situation. The essays we have collected, therefore, not only report on the reactions and events that are connected to or are similar to the recent developments in Hungary, they also provide a deeper analysis and critical reflection on the origins of the anti-liberal wave that has swept over all of the countries in recent years. As 1989 and what followed from it seem to be quickly transforming into history, the contributions we have gathered here can also be read as a discussion of the emerging processes of negotiating recent history in the public and political realms. Geographically, the contributions span the entire region from the Baltics to the Balkans, although not every country is covered, and they provide an intriguing insight into current party political struggles, public discourses and social mobilizations over the legacies of 1989 in these countries.

During the dramatic events in spring 2017 in Budapest, summarized and put into historical context by Victoria Harms, commentators were quick to point out that there was more at stake than just the future operations of an extraordinary successful and world-renowned university. The 'Lex CEU' stands in line with other measures adopted in recent months by the increasingly authoritarian-acting Hungarian government that aim to weaken civil society at large and thwart the very idea of open society and a rule-of-law state. An essential part of Viktor Orbán’s open campaign against liberal democracy is to create an enemy, personified by George Soros, the Hungarian-born billionaire who founded the CEU and secured its independence through a generous endowment. Soros has been one of the most ardent and effective supporters of civil society and human rights advocacy in the region throughout the communist period and even more since its collapse. Anti-Soros rhetoric has been interpreted by some as barely veiled anti-Semitism, but more importantly it is viewed as part of a broader effort by governments in various countries in the region to weaken civic organizations and to turn the tides against the kind of liberal democratic views and open society enthusiasm that marked the 1990s and early 2000s. In other words, as the democratic transitions of the 1990s are slowly fading into recent history, the political struggles over the 'right' interpretations and narratives of the processes and values that followed the end of communist rule are in full swing.

The developments in Hungary reverberated throughout the region. Social media and other online outlets were flooded with statements of solidarity by academic institutions or individuals from the neighbouring countries, and the local media reported. Yet, as some of our authors show, national governments, for example in Romania and Serbia, but also in the Czech Republic, were rather reluctant to speak out against Orbán. In fact, Orbán’s attacks on independent NGOs and the defamation campaign against Soros that accompanied the Hungarian legislation often took root, as similar rhetoric and slogans had already appeared in national-conservative and right-wing populist discourses across the region for some time. Our authors demonstrate that anti-liberal political stances against human and minority rights, academic freedom, or an independent and government-critical media, have surfaced in public statements and policies in many of the states covered here. In Latvia, they are still kept at bay, as Pauls Raudseps observes, less because of any majority-backed liberal consensus in society, but rather due to a political stalemate between liberal and conservative forces, as well as to a relatively "pluralistic public space where various political, social and life-style choices can exist side-by-side". In the case of Bulgaria, Elitza Stanoeva reminds us that illiberal policies targeting ethnic and social minorities have been part of the political reality since the communist era. Yet she also sees a certain increase in anti-liberal and nationalistic rhetoric – most recently in connection with the refugee crisis, the potentially fatal combination of pervasive elite corruption and a widely controlled media space that makes it ever more difficult for the already rather small community of human rights activists and proponents of liberal democratic values to be heard. Even the Czech Republic which, according to Marie Heřmanová and Štěpán Drahokoupil, is the often proclaimed "beacon of hope" for democracy in the region, seems to be on the verge of "backsliding", as anti-democratic and populist politics are gaining momentum in the approaching parliamentary elections. In the case of Poland, Marta Bucholc notices a distinct narrative shift in which "the 'Lex CEU' is framed as a nationalist revision of post-communist transformation and European integration". Thus the recent move against the CEU in Hungary is just a logical step in a long-standing anti-intellectual form of politics that finds its emulation in Poland too.

Our authors mostly come from the region; they are journalists, scholars and civil society activists, which amounts to quite different disciplinary approaches and worldviews. While several of them point out that the anti-liberal and populist tendencies they observe are a global phenomenon, most of them also seem to agree that there is a specific regional flavour to the current illiberal and anti-liberal wave sweeping over Central and Eastern Europe. To understand this better, they often go back to 1989 and trace the emergence since, or rather trace the continuing existence of illiberal values and, later, openly anti-liberal (and anti-Western/anti-EU) attitudes and their manifestations in politics and society. Moreover, they reflect on the failures of those who embraced the values of liberal democracy to find appropriate answers to issues of growing socioeconomic inequalities, government corruption and cronyism, globalization and the weakening powers of the nation states. What our authors suggest is that the current situation forces us to re-assess the narratives of a 'liberal consensus' in the 1990s and the imagined irreversibility of democracy and rule of law in this part of the world that so many believed in after 1989 – and all the more so since the enlargement of the EU. As Ágnes Gagyi puts it in her contribution: "making sense of the present crisis may demand that we wholly revise the post-Cold War narrative of post-socialist democratization itself".

At the same time, there is no clear-cut regional pattern. Not all of the countries that emerged from communist rule some 25 years ago are on the path to populist authoritarianism. Even though populist right-wing forces that encourage and legitimize xenophobic, bigoted and nationalist public discourses seem to be on the rise across the region, there are also signs of an increasing civic counter-reaction. Oana-Valentina Suciu reminds us of the mass-scale protests against a corrupt political elite in Romania in early 2017, which she calls the "Winter of the Romanian Social Awakening"; other major street protests against illiberal policies were witnessed both in Poland and Hungary. The persistent campaigning (often outside established political channels) and educational work of NGOs, academics and human rights advocates, for example in Latvia and the Czech Republic, also show that the liberal-minded, democratic parts of society – struggling though they may be – are still alive and are able to mobilize.

We still do not know how the CEU story will end – whether the university will have to move out of Hungary or find an arrangement with the Orbán government to continue its educational work in Budapest. The Hungarian government will most likely not cease its Kulturkampf against liberal democracy and open society, all the while the Polish government is following suit, trying to dismantle basic principles of the democratic state. The EU with its long-lasting legal procedures and negotiation habits has so far turned out to be rather toothless in the matter, despite the recent launch of infringement procedures against Poland and past interventions in Hungary. The contributions to this special feature, indeed, paint a rather worrisome picture of national political elites that are deeply corrupt and do not shy away from utilizing right-wing populist and anti-liberal rhetoric to preserve or gain power. It remains to be seen whether they can be stopped by popular protest or whether the liberal and democratic components of the political elite can overcome their divisions about questions of social justice, economic policy and the regulatory function of the (democratic) state, in order to stop the further backsliding of democracy. The countries of Central, Southeast and Eastern Europe are hardly alone in this struggle; Europe and the whole democratic world today seem to be implicated also.[3] By focusing on efforts to rekindle liberal democratic regimes and, along with that, to re-write the narratives of the last quarter of a century, this special feature of the Cultures of History Forum is intended, not just to elucidate our worries, but to be a small contribution to understanding what is going on with democracy and the ‘narratives’ in the region.

Copyright (c) 2017 by Imre Kertész Kolleg, all rights reserved. This work may be copied and redistributed for non-commercial, educational purposes, if permission is granted by the copyright holders. For permission please contact the editors.